The past few Sundays were spent burning fuel going around the city looking for something interesting to shoot.  Walking is definitely a better choice when shooting the streets, but seeing the same scenes week after week and revisiting the same places is beginning to feel like groundhog day.  If it isn’t too much to ask, I would like to have rain on a Sunday morning for a change. 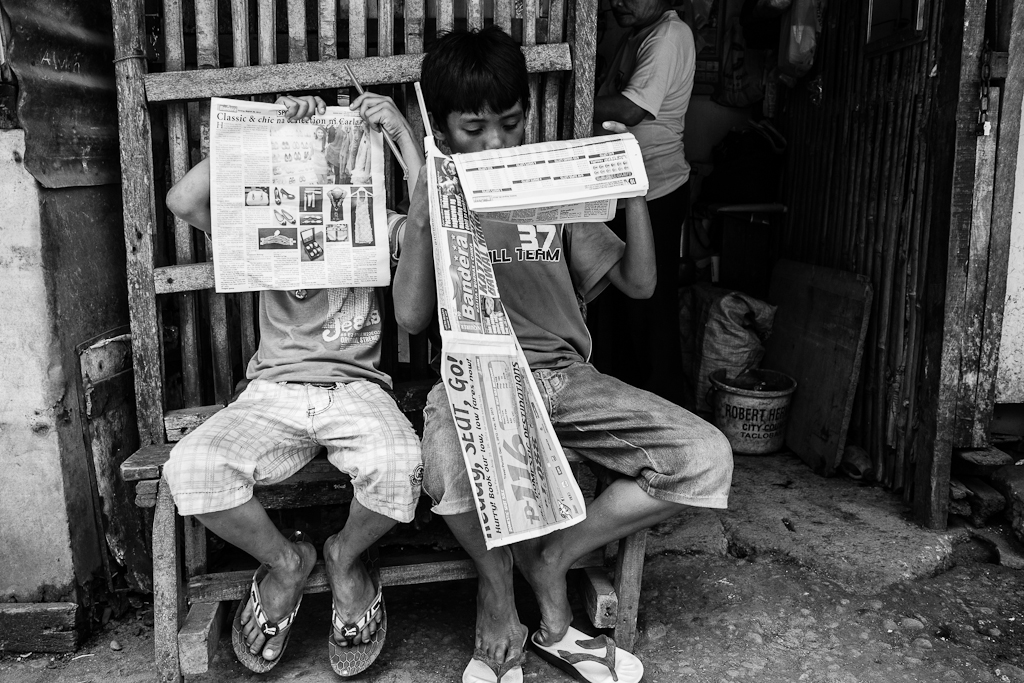 These boys were too preoccupied reading the morning papers.  It’s good that they know how to read and I’m glad about it……… until I realized that they were poring over a smutty tabloid.

The natural order of things – boys looking for bigger toys, and in this case, bigger marbles to play with.  Speaking of marbles, I haven’t seen children playing with marbles lately.  I remember seeing big glass jars filled to the brim with marbles in sari-sari stores, but that was decades ago.

Al fresco dining.  This place used to be a bus terminal before McDonalds set up a restaurant nearby, with barbecue stalls along the pier.   I grew up in this neighborhood and had my share of chicken barbecue dinners then.  P15 would get you a good sized chicken thigh and leg, while the smaller cuts were about P7 or P8 each.  Now it’s P15 for the smaller pieces.  The chicken thighs are more expensive, but they’re not any bigger, just flatter and wider as if the chicken were run over by cars while crossing the street.

I stopped by a fishing shed earlier in the afternoon, just in time when the week’s catch was being hauled in from the boat.  It was something I’ve always wanted to shoot, but didn’t.  It was not a public place, so I asked the person in charge if it was ok to take some photos.  I was refused.  I stayed for a little while longer looking around but didn’t bother with my camera.  At least I know what to expect next time I come back.  When I asked leave from the manager, I was told that maybe next time when I come back I’d be lucky to get permission from the owner.  I shall be looking forward to that.

I also dropped by to see Gwynneth late in the afternoon and gave her a couple of pencils and a notebook.  Sorry, no photos, but I’m sure you can imagine a sweet, carefree, innocent and genuine happy smile of a child receiving a gift.

24 thoughts on “grown up boys”