When I first came across the Humans of New York (HONY) facebook page, it dawned upon me that it was something I could start in my hometown.  I would call it the Humans of Tacloban, and the only difference between that and what I’m doing now is I have to start doing more photo walks.  It would take a while before the project hits the map, if ever I get it started, but wouldn’t that be great?

He learned to ride a bike two years ago at the age of 75, and rode off to the sunset after allowing me to take his photo.  His last words to me were “thank you”.  I did thank him too. 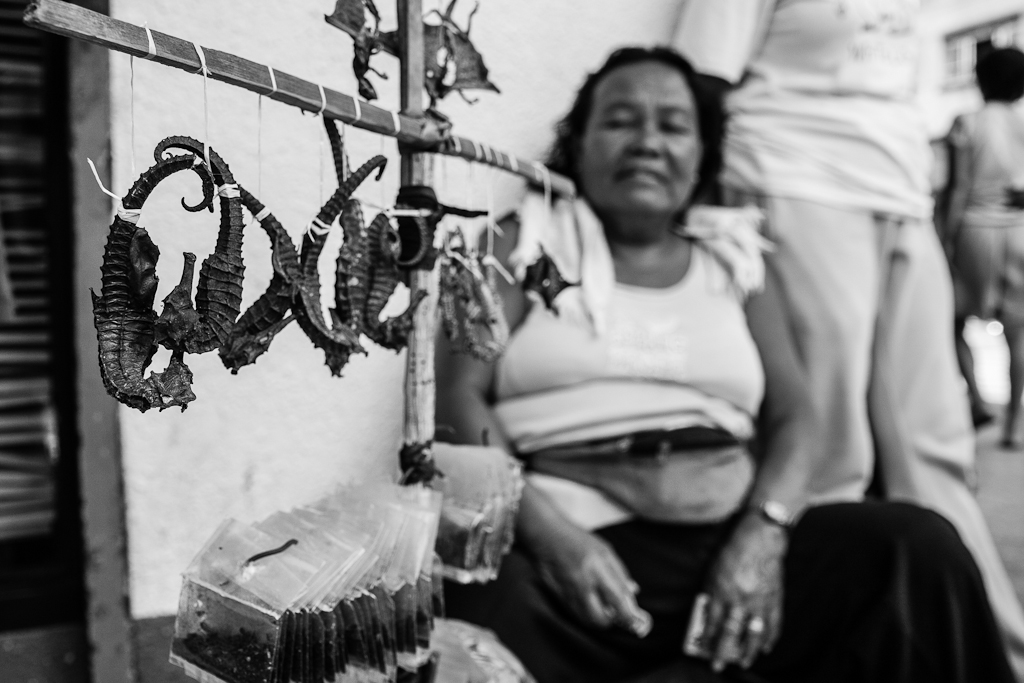 Many blog entries ago (I can’t remember when), I posted a photo of her and her dried flying lizards.   Now, she’s added dried seahorses to her menu of asthma remedies.

What was supposed to be a quick photograph turned out to be a long conversation.  She is supporting a granddaughter and a grandson in their education, and she’s quite proud of them both.  They’re both in the top 10 of their respective classes, and her granddaughter is a lyrist in the school band.  Of course she had to spend money for the band uniform, the boots, and the lyre, all of which had to come from her meager earnings, but she wasn’t complaining.

As for the rest of the story, it’s best kept private.

And this is the star of the day.  I took only 4 photos today, and they’re all of this little girl.  She was cleaning the wall when I passed by but was already done and resting by the time I walked over to where she standing.  But this wasn’t another quick pose and shoot….

Gwynneth Jean is her name, she is 3 years old, turning 4 this October 19.  She’s in day care and she has a new pair of shoes, which she wasn’t able to show me because her mom wouldn’t let her.  When asked what she learned in daycare, she sang the Philippine National Anthem while standing on the bench with her right hand placed over her left chest.  And then she followed it up with her rendition of “Bahay-Kubo”*.  She invited me to sit on the bench beside her, but only after asking me to take her photograph.

She told me she didn’t have a notebook and pencil, and I thought I had some in the car.  So I went back to the car to get them but it turns out I’ve already given all the pencils to street children.  And then I remembered having one fancy ballpen an aunt left in the car during her visit.  It had a switch that made the crystal half of the pen glow with red, blue and green light.  I’m sure my aunt wouldn’t mind me giving it to this adorable little girl who is about the same age as her granddaughter.

This is my 4th time to shoot in this place.  I’ve always made it a point to pass this way whenever I can after missing out on a photo I should have taken.  (https://afternoonwalks.wordpress.com/2012/02/10/after-the-rain/)