It’s now 2012 and here I am still posting photos taken during the last days of the year gone by.  I had no expectations about personal time for my photography during this trip as with me were my family, my parents, all my siblings except one, and their family totaling 21 persons.  As usual, the task of navigating the streets and making sure we are on the right bus or train was given to me so the camera around my neck was dead weight but I didn’t want to go wandering around naked.

I just got my newly purchased but used 24mm f/2.8 lens, and my shoulder and back were already rejoicing.  I suppose my trusty 17-55 won’t be getting any sunshine for quite some time.  I would still prefer a wider lens or maybe get myself a full frame body if the price drops considerably as I find myself having to take a couple of steps back to get everything inside the frame.  The photos here were all shot with the 24.

This was my first foray into street photography abroad.  It was during the holiday season and so the streets were jam packed with people.   Too many people everywhere, and everybody was in a hurry.

The experience was totally different from what I am used to; people just didn’t have the time to slow down and ask, or care.  Maybe it is because there are just too many tourists with cameras everywhere, and then there are camera shops in just about every corner so I guess people are so used to seeing cameras everywhere.  My first thought about street photography in a crowded city was like shooting fish in a barrel.  Lots of fishes in a barrel.  There are a lot of people walking around, minding their own business or stuck to their phone screens and earphones.  Then it dawned upon me that while there are many interesting subjects to shoot, I am not just shooting at people.  My intention is to tell a story.

I didn’t see the “no photography allowed” posters on this master’s front desk.  There were about ten or more individual printed pages of different cameras with the red circle and slash symbol taped together that would have covered me from head to toe.  I was just too focused on him and his painting until he turned to me and shooed me away, then pointed to the printed pages on the front desk.  Sorry, too late for that.  I was able to draw and shoot first.

I did find small pockets of time for this obsession of mine, and they were during the times when everybody was busy shopping.  Except for a few basic things, I have everything I needed to survive the trip.

There were a lot of cameras hanging around people’s neck everywhere I turned, and most of them were fancier than my aging 450D.  Even the camera shop salespeople were very polite and accommodating, and from the looks upon their joyful faces I had a nagging  suspicion that they are expecting me to spend a lot of money on a new camera body.  I must have disappointed them when all I bought were a rear lens cap, a UV filter and a lens hood.  Next time perhaps.

I haven’t seen any pedicabs (bicycles with passenger side cars) in Hong Kong.  People walk many blocks to get to their bus stop or train station in Hong Kong whereas some people in my hometown will hail a pedicab to drive them up a hundred meters.  We do enjoy a more luxurious lifestyle in the Philippines.

One of the many restaurants across our hotel.  No, I’m not ordering.  I’m just taking pictures.

Life on the fast lane.  They must be the Joneses. 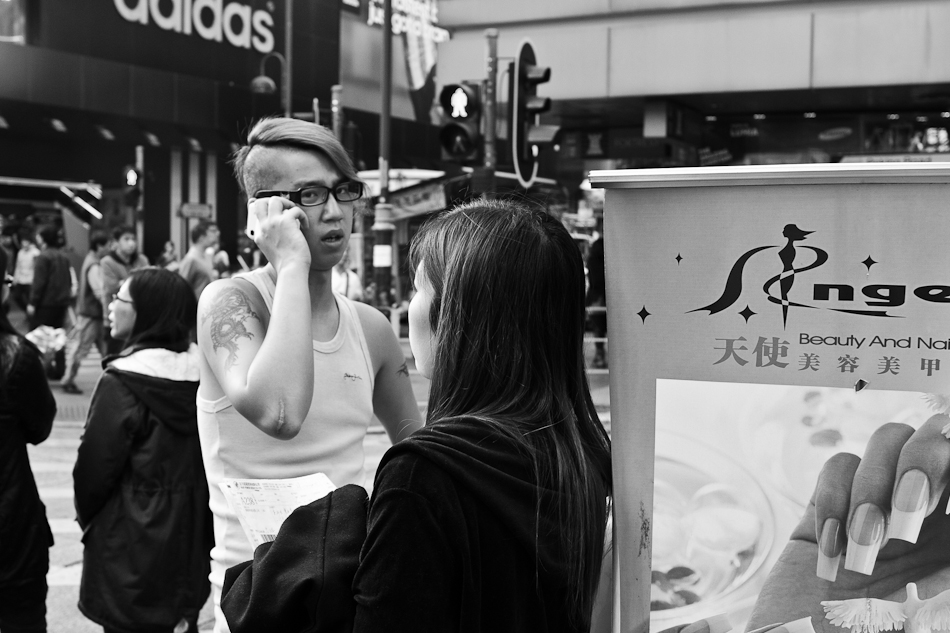 Everybody seems to be on the phone a lot.  Phone calls must be cheap, and definitely easier than sending SMS.  Best of all, you don’t have to put on a smiley face when you’re talking on the phone.

That’s a map he’s reading.  Notice too that the streets are clean, and people do follow traffic signals.  I sometimes wonder why, despite our politicians being able to travel abroad and learn from what they see, cannot get pedestrians and drivers to follow simple traffic signs.  Then again, I forget that they live privileged lives.

I thought I saw Johnny Depp.  This could be my ticket to shooting the stars!

People waiting in line for their ride home.  No pushing, no shoving, no overtaking, no dispatcher.  Everybody is on the sidewalk, everybody is on the designated bus stop.  I’m sure everyone at home would want to have order and discipline.  My opinion on this is give the government a manageable population to work with and we can have order.

Meeting a fellow street photographer.  She’s shooting on film.  I am reminded to break open the first roll of 120mm film I bought half a year ago, and load it into the Minolta TLR that’s not been used yet after I got it serviced.  I still need to return the camera to the owner.

At the back streets of a busy shopping area.  Pick a number.

On the less busy side of the main road, a collector of antique watches.  Suddenly I lost track of time.

Another busy intersection.  I could sit here all day and watch people and cars pass by.  I should come back and do only that next time.

There are a lot of interesting characters walking around, and many sets of eyes are on the lookout.  This young woman didn’t see me standing in front of her.  I thought I was invisible on the street corner, but found out soon enough that she didn’t put any lenses on that frame.  I don’t see the point in that; it would be like me wearing a sun visor under a blistering noontime sun.

I will not make any judgment.  I’ll let you decide for yourself what you make out of this scene. 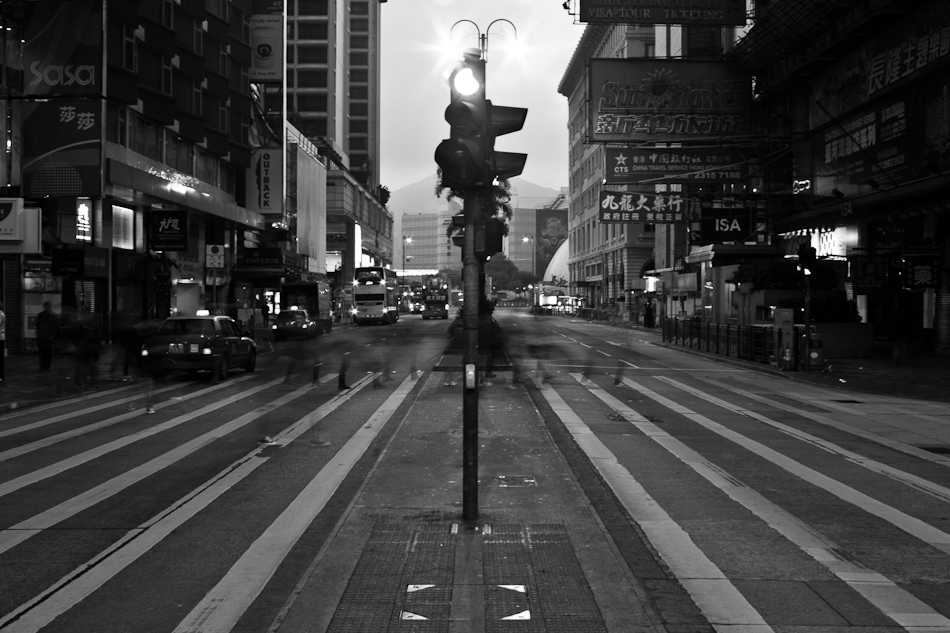 This is how it looks like in the early morning.  Only a few souls wandering in the cold morning air, and one sleep deprived shutterbug getting questioning stares.  My only time to be alone and enjoy the walk at my own pace, in any direction I choose to go.  I’m trying to get lost on purpose.

What is it like to live in Hong Kong?  The giant billboards, the flashy storefronts and the cosmopolitan disguises tell one story.  The other side of the story could be something very different from what we see on the surface.  A day in the life of any one of these people could make a nice photo essay.

The streets are still relatively empty at 6;30 in the morning except for the buses.  The sun is still nowhere in sight.

I’ve always wondered about dog ownership.  Is it the human who owns the dog or is it the other way around?

This place’s opulence speaks a lot about the people and their lifestyle.  People here can really afford these things, unlike a lot of pretentious people I have met.  Why would I want a $500 wallet when I carry a lot less than the cost of the wallet by itself?  Buying expensive make up might be more practical as it will definitely increase one’s face value.

What I’ve notice here is that most of the blue collar workers are people who are past their prime.  Even the cashiers at McDonalds are way past college age.  Their kids could even be out of college already.  I am sure there are a lot of logical answers to this, and I won’t even venture a guess.

Let’s call this a wrap.  We’re done for 2011.  Happy New Year, everybody and thank you for sticking with me throughout the year.