of nuts and men 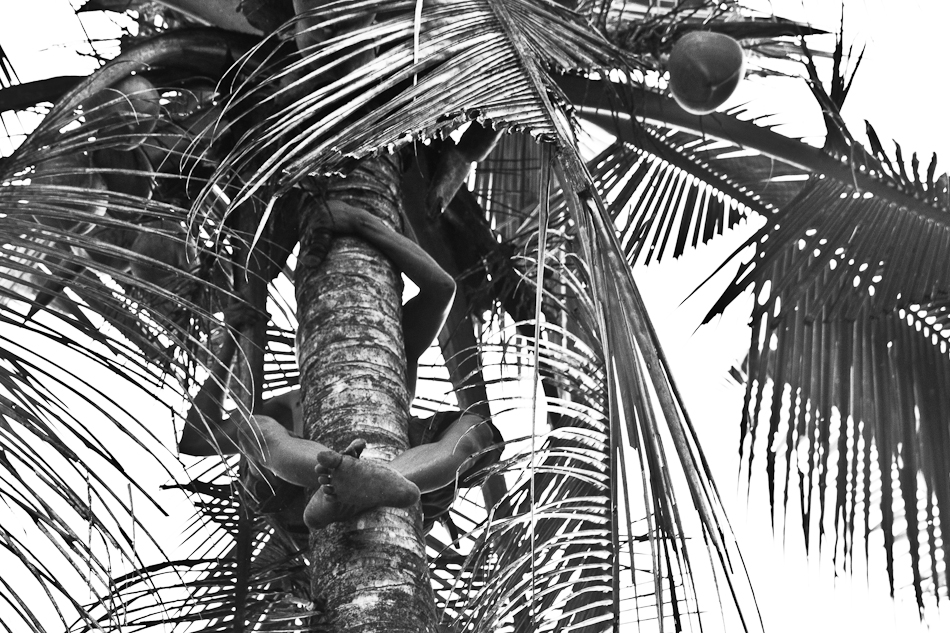 Gathering coconuts is a very common occupation here in the rural towns of Leyte where coconut trees abound. One of the main sources of income is copra (dried coconut meat), and it goes without saying that climbing coconut trees is a skill most people have learned. Some trees can grow as high as 20 feet tall, but that is nothing to an experienced climber who can get to the top very easily. With both legs and an arm wrapped around the tree trunk, the free hand holds a bladed instrument and cuts down mature nuts for harvest. There are no safety harnesses, no safety nets. This is their livelihood and this has been a way of life ever since.

One expert climber is Rodolfo Cerdon. He has been climbing trees since he was barely in his teens. Now aged 62, he still climbs coconut trees and gathers the nuts for a living. The only difference is that he is blind.

Having lost his vision at the age of 3, he didn’t allow himself to be dependent on others to provide for him. He is one of the most sought after coconut gatherers here in Sta Fe. During peak season, he can gather more than a thousand nuts in a day. His income depends on the market price for copra. On a good day he gets P7.00 per tree he climbs, and P5.00 if not. Considering the risk he takes, the pay isn’t much, but that is how it is.

A native of Dulag, he is now living with his sister in Sta. Fe, Leyte so that she can look after him in his advancing years. His constant companion is a young nephew who guides him around the village and takes him to where he is needed.
He had “Lover Boy” tattooed on his right arm when he was about 13, just for fun. Somehow it seems like someone made fun of him at his expense.

If he isn’t with his nephew, the landowner will have to guide him and make him stand in front of the tree he needs to climb, and while at the top, he is given directions to where the coconuts are relative to his bearing. It is not an easy task for a man who has to feel his way around from 20 feet off the ground, and who sometimes have to let go of both arms from the tree trunk to get the job done.

Thankfully, he isn’t expected to pick up the nuts after they are cut down from the tree. However, the job isn’t done yet. He still has to strip the husk from the nut.

The harvested coconuts are handed to him one after another as he impales them on a steel spike fixed to the ground pointed upward directly at him. A downward push of the coconut on top of the spike is needed to remove the husk from the inner shell. This is done repeatedly and doing that means he has to lean forward into the spike 3 to 5 times per nut. Not a safe job, especially for people lacking focus as speed is also a requirement. Stripping the husk off takes less than 20 seconds, but a thousand nuts will take more than 5 hours to finish. 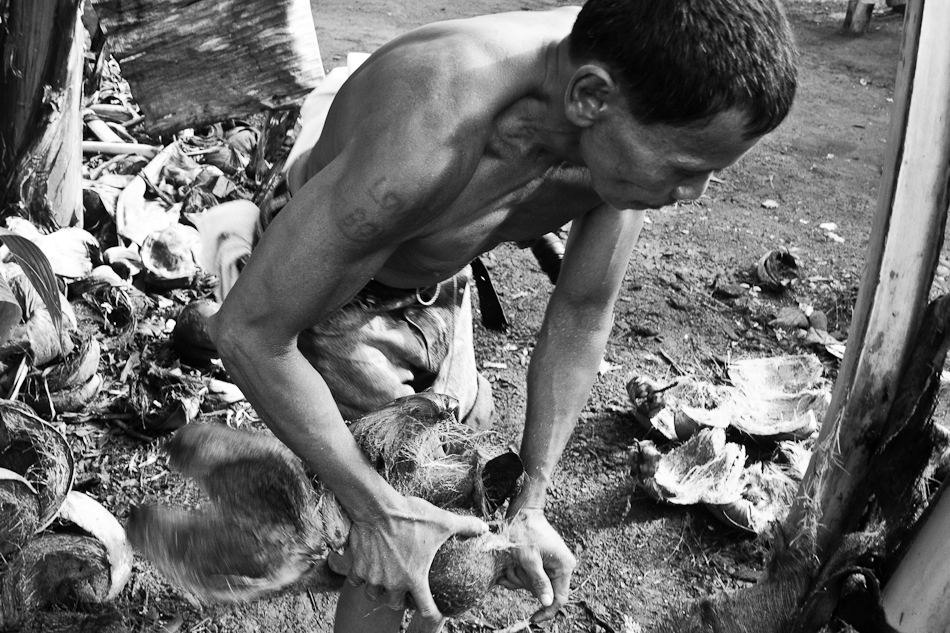 Rodolfo Cerdon has been out of work since May 2011. It takes around 3 months for the trees to bear nuts, and the number of trees is slowly dwindling. With new trees taking 5-10 years to grow and bear nuts while his aging body is starting to slow down, the coming years will definitely be a big challenge for him. 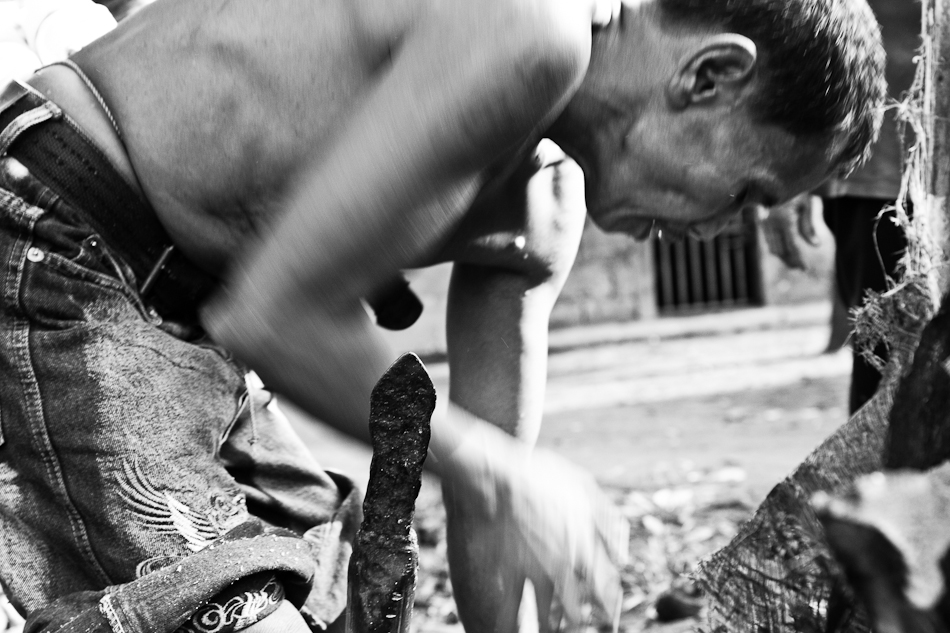 (Special Thanks to Curtis & Flor Marchand for making this possible.)

3 thoughts on “of nuts and men”